From Easter Egg to Cosmic Egg

On this Easter Saturday, and following a simple worship in the shrine room in honor of Lord Jesus, our young children in Oregon got a new teaching to add to the Easter Egg theme.  Like above, the focus was on the Divine Mother who is the Mother of the Universe, by whose power everything is projected, sustained, and dissolved, just like waves in the ocean.  She alone, like the water of the ocean, is the real part of each of us, just as the water is the essential part of a wave.  The scriptures refer to this Source and Substance of the universe as the Golden Egg, Hiranyagarbha.  It has its corollary in Om, the primal vibration.  Additionally, the children were told the analogy Sri Ramakrishna used describing the old woman who saved various things, like seeds, and "sea foam" and other items in a hotch potch jar for later usage.  Like that, the Divine Mother saves things for the next creation (projection).  What might those be?  Well, there are lots of possibilities and you can see Babaji's commentary in his book, Sri Ramakrishna's Stories, page 39. 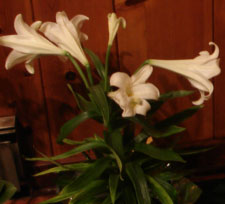 For our purposes, we used this as an opportunity to introduce a little Sankhya philosophy, namely the 5 elements (ether, air, fire, water, earth), the 5 senses of perception (hearing, touching, seeing, tasting, smelling) and some of the 5 senses of action (handling, moving, speaking, etc.).  The ancient seers went to great lengths to list all those principles (tattvas) that are the not-Self.  And that is the purpose of creating a list of Cosmic Principles (whether 36, 24, 16, 8 or 5).  Their primary purpose is to aid us in getting a handle on what is the Self and what is not the Self.  In any case, the five elements and 10 senses could be listed as items saved by the Divine Mother for each cycle of projection.

For this teaching, the children's project was to fill a large, yellow, empty plastic Easter Egg with clay figures representing the elements and senses, and also other items - noses, hands, snakes, flowers, eyes, and many other things.  All of this went into their own personal Easter Egg/Hiranyagarbha/Mother's Hotch Potch jar.