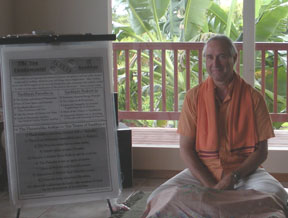 Last summer, Babaji set out a guideline for what our young teens should be learning.  His list included the following charts, leaving it up to the kids' acharya to draw teachings from them in a suitable manner.

Here is a brief description of the charts and some explanation behind these choices, which will probably be useful for adults too:

With these guidelines established, the most recent class with our youngsters, who are all turning 13 years this year (their bodies, not their Atman!), we embarked on a rather ambitious exploration of Time with lots of questions to investigate the time terrain with.  These lessons are always an opportunity to learn more about our lineage, and itihasa (scriptural history) as well.  Thus, we also used stories about Holy Mother, Nachiketas (the boy who questioned the god of death, Yama), and Arjuna on the battlefield with Sri Krishna.

For openers...just to start us thinking deeply...and you can try these at home too:
What is time? Does it have an end? Does it have a beginning? Is time the same for everyone?The Seers speak of Timeless Awareness - what do you think they mean?

In the Katho Upanisad, Yama (god of death) tries to dissuade the young Nachiketas from seeking the highest Knowledge by tempting him with thousands of years of life and celestial pleasures.  Nachiketas refuses, saying they are all of short duration, prompting these questions:
Can you think of something that you would never get tired of? In eternity, how would one measure the difference between the life of an ant and the life of Brahma (over 400 billion years)?
In answer to a disciple's question about how long it takes God to create the universe, Holy Mother responded, "Do you think He creates like a cookie maker?  No, He creates all at once!"  And that prompted this question:
How do you suppose God sees Time?
How would birthless, deathless Reality see Time?

It is too bad we did not have a recording device running.

In the context of Arjuna's painful duty of leading his armies against wrongful rulers in a war everyone was unable to avoid, the children learned a new pass phrase.  This is the very teaching Sri Krishna gave Arjuna to stabilize his restless mind and bring him back to inner peace.


Na'sato vidyate bhavo, Na'bhavo vidyate satah
The unreal has no existence, the Real never ceases to be.

Sat: Existence & Truth
The Sanskrit word for Truth is Sat.  It is also the word for Existence.
Why do you think the words Truth, Real, and Existence are so related in Vedantic thought?

We devoted a good portion of our class time to unwrapping what Sri Krishna and the Seers mean by Sat and asat*.  It is never too early to place these concepts out in the open to be grappled with. In the Itihasa there is the story of an awakened mother who daily sang to her infant lullabies affirming the child's nature as Atman and the importance of renunciation.  This is another reason why we teach a few important Sanskrit words with each lesson: so the children become familiar with salient philosophical concepts so much needed as they enter adulthood. 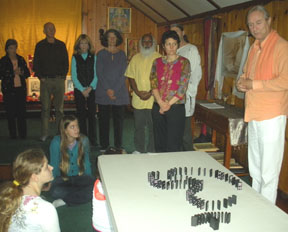 Not just any domino theory........
We closed our lesson with a teaching on AUM, breaking it down for analysis using the teaching of the Four States of Consciousness: A for waking, U for dreaming, M for deep sleep, and the shvara (one-eyed smile) for Turiya, the Witness of all states that remains ever unaffected by the other three, even while being the substratum of those very experiences.  This led to our class project:

The children formed the Sanskrit character for AUM on a table using dozens of domino tiles.  This took a bit of skill since they had to be lined up in such a way that the three curves representing waking, dream, and deep sleep all fell down when the first domino was pushed.  And the point?  The shvara, was untouched and unaffected, being the "detached" witness of all the activities going on in those three states that are subject to time, space, and causation.