This is the account of a four and a half year old’s first SRV Kid’s class written to his parents afterwards by Annapurna who teaches the children. Little M is special in his own right, but also unique because he is the sangha’s first child born to sangha parents. From the beginning he has made visits to the shrine, been rocked in loving arms during pujas, and attended satsangs with growing attention span over the years. He will reach the magic age for attending the summer retreat just in time for this summer.

After mother and father said goodbye, little M and the children’s acharya prepared for a simple arati with flower and food offerings:

“We first entered the shrine and bowed down to Sri Ramakrishna, Holy Mother, Swamiji, and Mother Durga and Kali, saying each of Their names. Then we went out to pick flowers. I told him it was a tradition to use our right hand. He pointed to the flowers and I picked them, then handed each one to him to put on a plate. Then we went to the dining/puja table and dipped each one into a bowl of water and said ‘Om Sri Sarada’ to bless and purify them. (It also prepares us for puja by concentrating like this.) Then we prepared the Prasad plate with cookie, apple slices, and a cheese sandwich. He helped me cut the apples by holding the knife with me. We said ‘Om Sri Sarada’ each time we sliced the apple.

“He helped me carry food and flowers to the shrine. Then he got his instruction in puja.
M learned how to anoint the upper 4 centers (representing the chakras) with Ganges water and we talked about how this made our body, energy, and thoughts pure and calm. He wanted to light the matches, but I told him he could do that at home with Mom and Dad, but not at the public shrine. However, after I lit the candles, he lit the incense from a candle (which I held safely). Then he offered the sweet fragrance to Master, Mother, Swamiji, to Jesus, Mary, Buddha, Ganesha, and Siva. He wanted to know who Jesus was. 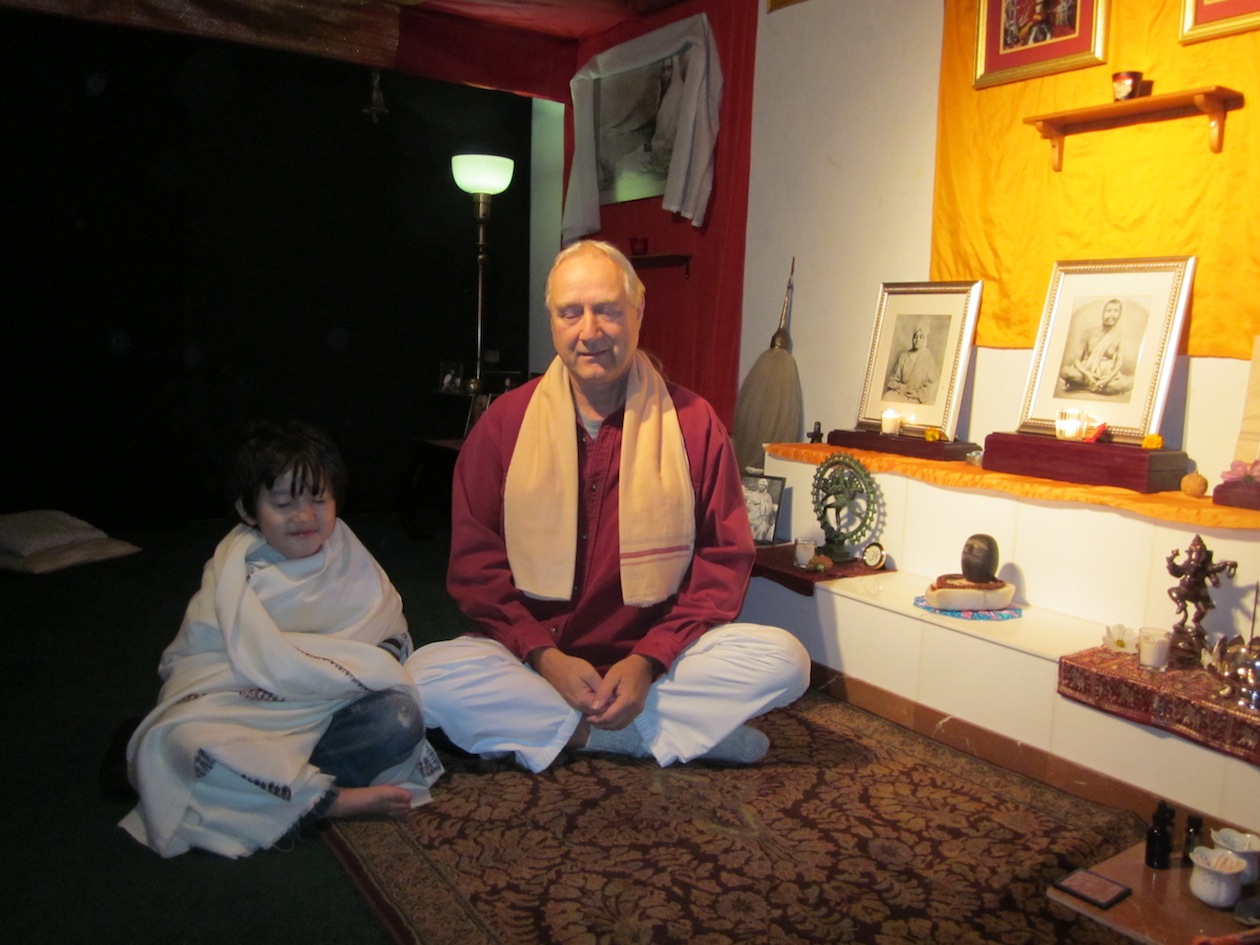 “Meanwhile, Babaji was watching from behind the hallway curtain, waiting for us to make the flower offering before he would come in and teach M about meditation. We finished the flower offering. M offered flowers to Holy Mother, Sri Ramakrishna, Siva, Swami Brahmananda, Ganesha, and also to Jesus and Buddha.

“Now Babaji came in, bowed down before the shrine, and told him how sweet it was to see our puja. I wish I could tell you all that he said – it was so spontaneous, so attuned to just where M was at that moment. I had a small chuddhar I have rarely used and told him he could use that whenever he comes to the shrine, but it is only for meditating or attending puja in the shrine. Babaji draped it around him, telling him it is helpful for meditation. Then he checked his posture and did a little bit of breathing with him – just a few deep breaths through the nose with the mouth closed, holding a little, then breathing out. He taught him the mriga mudra (deer mudra) and that it means ‘what is there (pointing to the shrine/divine image) is here’ (in my heart). Next he told him to visualize Sri Ramakrishna in his heart, seated on a pillow – ‘your heart is His pillow.’ M liked that idea. Then Babaji explained that he would ring the bell once for him to close his eyes and concentrate. That we would all meditate together, and after one minute, he would ring the bell and he could open his eyes. M got just a little wiggle going at 30 seconds. Babaji said ‘30 seconds more,’ and he refocused. M got a lot of encouragement from Babaji. Then Babaji offered the Prasad formally and left.

“Next, M and I closed the shrine and returned to the dining area. While he ate Prasad, I read Ganesha and the Cat to bring out the teaching of ahimsa, non-violence. He was very engaged with it and had a lot of empathy for Ganesha wanting to play, but then he felt empathy for the cat and got pensive when Ganesha hurt her. Our time was up then. We will continue with this story next time. [see story: link]

“M was attentive for the whole experience and was very good about reigning in his abundant energy when asked. How easy it is for him to get excited! Gives me joy seeing that spontaneous burst of shakti power. In time he will be able to channel it so he can let it run vigorously in constructive ways even here at the ashram!”