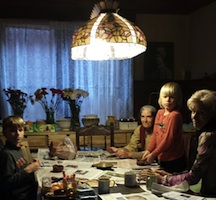 The most recent visit to our SRV San Francisco center commenced the first in a series of classes intent on cultivating the children’s awareness on the connection between consciousness, mind, senses, and elements.  This establishes a solid foundation for teachings concerning discrimination between the Self and the nonSelf,  the real nature of objects, and eventually the knowledge that the universe is a manifestation of mind at individual, collective and cosmic levels.  This sounds like a tremendously high goal, yet it can all start in a children’s class with a block of clay and creative conversations.

We began with our tradition of practicing the meditation posture:

• seated on the floor in “tripod” position, cross-legged with hips level
• small of the back flat, not arched, and the pelvis straight, not tilted forward
• comfortably straight backs balanced over pelvis, not leaning forward or back
• chin slightly tucked to straighten and lengthen the neck.

This position is conducive for physical stability, even breathing, and unobstructed flow of energy up the spine.  It can easily be mastered by the young, allowing the focused mind to “lift off” the body rather than be constantly called out of meditation by it.  Then we practiced a simple breathing exercise to purify and calm the vital energy and mind.

Next,  we need to get the senses and our mind on our side and awaken our devotional feeling.  Arati is an ancient, unbroken tradition that facilitates this.  It is a simple ritual of “waving light” and offering incense, bell sounds, flowers, and food to the Divine Being represented on the altar and inherently present within each of us as the true Self.  This ceremony sweetens the mood and teaches us naturally about purity of place, action, and thought.

The children have experienced arati for several years, but at this meeting they began to learn some of the significance behind the offerings.  Each item that is offered represents one or more of the five elements. 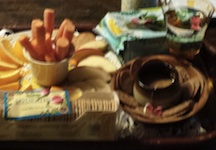 Arati, worship, is our opportunity to purify all the objects we experience by offering them to God. Everything we see, taste, touch, smell, and hear are made of the five elements. How do we identify these objects?  Through our senses.  The children were asked to connect these five elements of earth, water, fire, air, and ether with the senses that perceive them.  This project clearly fascinated them and it was delightful to watch them reason it out.  They were correct in almost each case. What a revelation it was that elements and senses go together

Earth connects to the sense of smell.  Why? because of the fragrance. All odors are generated out of the earth like soil, wood, growing things, etc.

Water connects to the sense of taste. Why?  Because of flavor.  The tongue cannot taste without the presence of water (saliva) on it.

Fire connects to the sense of sight. Why? because without light, we cannot see with our eyes.

Ether/space (akasha) connects to the sense of hearing.  Why?  The ancient seers experienced that sound travels through space. (Although we did not go into much depth during our class, it should be noted that the rishis linked sound, ultimately, with the transmission of knowledge, which proceeds from The Word/AUM, and which is directly perceived in the mind as subtle sound vibration (thought) and expressed audibly via the words of the seers and in the scriptures.  The Indian philosophical view is that there are five kinds of space, each more subtle than the other.  The Word, the primal vibration, manifests all subtle and gross realms (akashas) and the characteristic vibrations that occur therein, audible sound being the most gross – vaikari.)

Next we discussed what happens to these objects in our dream state.  Previously, the children have been learning about our three states of consciousness and the bodies and experiences associated with them: 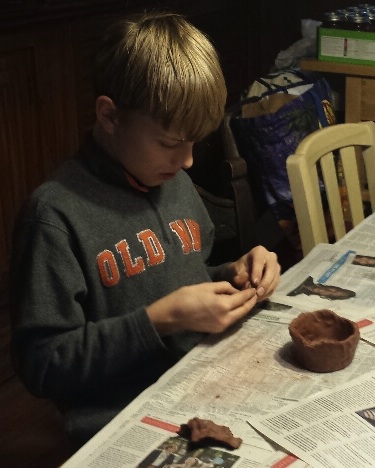 We talked about how in the waking state we have trees and climb them or pick fruits and flowers from them, and in our dream state, we also have trees and have experiences with them.  In our deep sleep state, the trees dissolve, but then we bring them out again in our dream state, and have them solidly when we wake up and use our external senses.  This teaching sets the ground for detachment from objects, for nothing is ever lost.  As Swami Vivekananda stated, “You 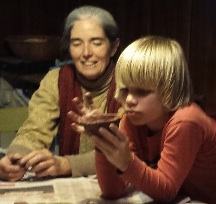 After this, we made our pranams at the shrine and went upstairs where a big chunk of clay was waiting.  Our project was to think about each element and create a bowl depicting each one.  What we do with those bowls will be the subject of the next lesson….  [to be continued…]