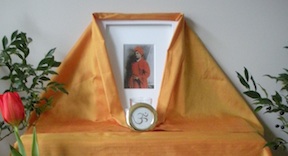 [Last February, we gathered with Babaji in honor of Swami Vivekananda’s 150th birth anniversary to study the nature of spiritual qualification in the aspirant through the lens of Swami Vivekananda’s teachings and statements.  Using Babaji’s chart, “Qualification is King,” as a foundation outlining essential concepts in seven philosophical systems (Sankhya, Yoga, Vedanta, etc), we explored these teachings and more via Vivekananda’s powerful statements collected from his letters in the Vivekananda Vijnanagita.  Some of the great swami’s statements are so strikingly lucid and sometimes shocking to mundane sensibilities, that Babaji humorously called them the original Face Slap, whose pure intent is to awaken people from the sleep of ignorance.  This is all the more funny if you see that the cover of the book has an image of Vivekananda’s hand created from kirlian photography in the late 1800’s.]


Vedanta does not concern itself with morals and ethics simply because no one gets to Vedanta without qualifying themselves via those first.  Karma is the discipline for those people.  Karma is the god of this world.

Living in Wisdom, being on retreat, is like putting on the brakes — the world stops.  A being like Swami Vivekananda, when he puts on the brakes, even the gods stop.  He's a nityasiddha, eternally free.  As Holy Mother says, he sits in meditation for 700 years at a time like a wooden statue before coming back to earth.  And someone very great has to convince him to "come down" here......

Coming on retreat, we practice the art of God in mankind.  God is not in the world (except as its substratum), the world is in God.

My flight to Portland had greatly upset my stomach, making me very body conscious, and being in airports meant confronting tons of different personalities, groups, and attitudes, poised to disrupt my mental state, which I had been trying to keep balanced before entering the Mother Wisdom retreat.

When journeying from Portland to Seattle, Annapurna and I had great conversations that erased any distracting thoughts I had gained while traveling. We talked about the important things.  In spite of the overwhelming presence of political campaigning in the media, we talked about God, and the activities of mutual loved ones.  Upon arriving in Seattle I was most definitely in a reverent state of mind.

The first morning of the retreat I fought to control my body from the disruption it had experienced the day before. I was frustrated that my body had gotten in the way of my meditation, but I knew that better meditations were soon to come as I became absorbed in the charged atmosphere.

The first classes were brilliant. The diagram on the curtain of nescience was extremely illustrative of the ills our society suffers from. I could relate to knowing how the fear of death affects family members and loved ones so negatively because they don't meditate on death. Fear of other entities was another aspect I find that cripples spiritual growth; of people my age especially. Many people my age are extremely fanatic. Fearing formlessness as well, people try and hang their hat on science and materialism, alone.

I met my friend Adam on this retreat and we engaged in spiritual conversation throughout. We talked about the classes, but also about our practice outside holy company, and how Vedanta saves us from everyday, potential pitfalls. I don't think I'm the only one to notice the age difference between older and younger sangha members, so it was nice to relate spiritually to someone my age.

In the following classes I was exposed to the beautiful poetry of Ramprasad Sen. His devotional poems are incredibly vivid, and illuminating. He was a fitting figure to discover that weekend, being known for his  devotion to Kali Ma.

With these teachings fresh in my head, I returned home with a new set of eyes. The combination of the teachings, meditations, arati, meals, and atmosphere pushed me to a new level of spiritual consciousness.

I certainly met some wonderful people during this retreat that made this possible.

A special thanks to Sandra for her wonderful hospitality, and to Annapurna, Loke Ma, and Babaji for making available these divine truths and practices. They have truly shaped my heart and mind, and the way I conduct myself in the world, for the better.

Happiness is over-rated.  What about contentment, peace, and bliss?  These are actually names of three gradated samadhis.  First you get contentment, then peace, then bliss.  After bliss comes formlessness.

Maya is the queen of all four-letter words.  But Sri Krishna states "let this disconnection with pain be known by the name of Yoga."  So here is a better four-letter word - Yoga.

People go seeking virtues, and later find them within.  People search outside for God, but only find Him within.

The primary impurities in food are not organic — they are subtle.  One has to inquire as to what intention food is grown with, harvested, and prepared.

We should all be "drying out in the jnana yoga tank."

Sankhya Sutra:  "Cause and effect are the basis of production.  There can be no production of that which is nonexistent.  Cream, for instance, that is inherent in milk, forms on milk, never on water."

The Seer perceives the chain of cause and effect that allows one to trace oneself back to the Origin, and then discover that ultimately, there is no Origin.  The Seer is the author of the book of Prakriti, and That never changes.  Like out of a cosmic chest of drawers, one pulls everything out, then tucks it back in at the end of a cosmic cycle.

As Vivekananda stated, you might have to compromise with the world at times, but you should never compromise the Truth.  Truth never changes.

All suffering is in Maya.  The best way to transcend suffering is to realize that Brahman does not transform.  Advaita is the way.

Face Formless Reality and know it is your death — the death of your separate individuality.  Give it away.

Sankhya Sutra: "Prasamkhya, introspective discrimination between the spiritual Self and the subtle material energy and its evolutes, eliminates pain and brings about enlightenment.  Thus, Sankhya insists that all the aspects of the nonself (Prakriti) be fully enumerated and carefully studied in order to bring about clarification of this essential distinction."

You can never be born with a pure mind, because you are never born if you have a pure mind.

Encapsulating such a rich experience in a few words is a challenge.  How do you describe a 'homecoming' that your soul has longed for this entire lifetime?  It was the perfect blend of structure and 'free time' and of learning and reflection. It was amazing to be in a group with such a clear shared intention, a community of Seekers committing to take a time away... a retreat... from the noise of everyday life.... in order to listen to the Truth from a truly gifted Teacher.

In 'holy company' it is easier to stay focused on the Divine because everyone is looking and pointing in the same direction.  I also noticed that the time spent in meditation was deeper and more insightful.  Yes, the people who attended were wonderful.  Yes, the house was beautiful and the food was delicious ... but it was the inspired Teachings from Babaji that we were there for, and it was those Teachings that had the most lingering impact on me.  I am truly grateful to God for having met Babaji, and to my soul for being ready to receive and remember the Truth.

What I remember most clearly were the Barriers to Spiritual Success chart (not sure if that was the name) and the Curtain of Nescience discussion.  Babaji has an amazing gift for researching the source material, distilling the information, and then presenting it in a comprehensive and clear way.

This was my first retreat with SRV, but it certainly will not be my last!  If you hear the call to join us, please do.