“The Infinite is happening now.  I am not separate from It.  One Consciousness. Do not be distracted by tiny, fleeting life occurrences.  They rise and fall eternally on the backdrop of Infinite Awareness.  Like shadows in a dream – not real.”  This excerpt from my journal was written during the Zen retreat.  The heightened atmosphere generated by our time of inner reflection was very conducive to such thoughts. 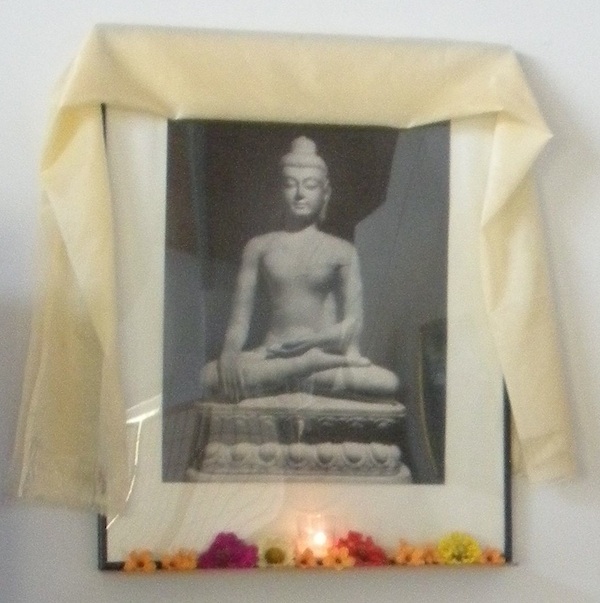 The Zen retreat, which was held in the Hawaii Ashram at the end of June, was peaceful and sublime.  The perfect tone was set by having participants adopt certain Zen practices such as wearing black, bowing, contemplating koan, and writing haiku.  Immersed in teachings on the foundation of Buddhism, we retraced how the spark of Truth moved through many generations while traveling from India to China, to Japan and finally the US.  The lessons went far beyond a mere comparative study of Zen vs. Vedanta, however.  Rather, the teachings which are now so familiar to SRV students — such as the Qualifications for Spiritual Life, the Precepts, the Three Worlds, the Six Transformations, etc., although taking on unique flavors given the people and customs through which they are expressed — show us that our deep study of Advaita Vedanta gives us the keys to unlock the truths present within these different traditions.

I especially liked the teachings on the Stages of Ox Herding, the Ox symbolizing Consciousness, and the seeking, catching, taming, riding, etc., are the stages of attaining Enlightenment.  Although I feel at times like I’m still at the stage of trying to “catch my Ox,” (stubborn and unbridled, it still yearns for sweet grasses…), I know that eventually, by carefully following the steps of self-effort, having ridden the ox home, my “bridle and whip will lay idle” (returned to the Source).

Inspired by the Ashram’s magnificent view of Maui’s Haleakala volcano surrounded by the blue Pacific, and taken by the principle of interdependent arising, this haiku came forth:

My own 30-year journey on the spiritual path has been a blend of Zen and Yoga.  Just prior to meeting Babaji 7 years ago, I underwent a Jukai ceremony, making a formal vow to uphold the Zen precepts.  Soon after that, my Zen teacher moved away and I became enthralled with SRV.  I respectfully hung up my rakusu and robes, but got them out and wore them again during the retreat.  So many memories came up for me as a result.  It was interesting to turn and face those memories of my former practice.  With Babaji’s instruction this time, I received much more of the underlying philosophy of Zen than I had ever known before.  It was also gratifying to learn that my former Zen teacher is in the same White Plum lineage as Lex Hixon, founder of SRV.  At the retreat, as I came full circle, I experienced a profound sense of beneficial closure.