Hand in Hand to the Goal…

Retreats are an essential practice for people living and working in the world.  Sri Ramakrishna clearly and frequently advised his householder disciples to retreat from the world periodically for spiritual reorientation.  Today, we can imagine him telling us to leave our computers, cell phones, and internet capabilities home, enter retreat in holy company and concentrate our minds completely on God.  When the world and its seemingly crucial activities are ultimately all zeros, we must saturate ourselves with the “1” (All-Pervading Divine Reality, Brahman/God) that gives existence and meaning to all else. 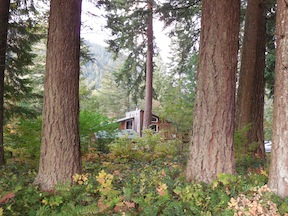 Retreats are an intensification of spiritual transmission from the teacher to both individuals and the sangha as a whole.  Swami Vivekananda once stated that as individuals we might not all be able to attain enlightenment, but as a community we can.  Swami Aseshanandaji has affirmed that Vedantists go hand in hand to the goal.  Retreats make this happen.

Our third Kali-Durga Retreat awoke more deeply within the sangha recognition of the comprehensive Reality we call Mother. Sri Ramakrishna describes the Divine Mother like a snake that alternately wriggles and is at rest. We might consider that Her wriggling motion is the projection, preservation, and dissolution of the universe. But in the course of this retreat, Babaji took us through his newest chart that expresses Her action and Her rest in inspiring detail – “Spiritual Transformation & the Goddess.” 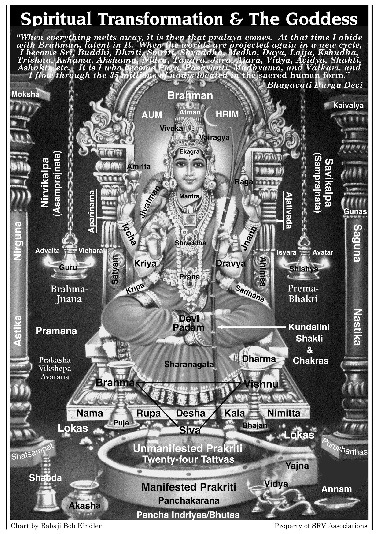 He explored Mother's pillars of Nirguna Reality (without attributes, nondual) and Saguna (with attributes, all of phenomena). With him we gazed into Her activities in the Causal, unmanifested realms, in the Subtle, mental realms, and in the Gross/Solid realms. Babaji presented teachings on Her seed syllables and mantras – how these are used to trace ourselves back from phenomena to immersion in Her. Her Four Arms were symbolically represented as Her Four Shaktis that wield the cosmic powers of Will, Knowledge, Action, and Matter. We explored some of Her infinite aspects that appear as ignorance-destroying philosophical systems attended by inspiring religious streams. For the first time, Babaji presented to the sangha the different kinds of philosophical proofs that are used to convince one of Truth and hone one's discriminative powers for penetrating through the cloud of ignorance.

The chart looks exhaustive, but of course, She is infinite. One of the ripening fruits of those four days was a view into how all seeming dichotomies of philosophical and religious perspectives, whether nondual, qualified nondual, or dual, are all harmonized in Her — they all stream from Her — with the open Secret of all secrets being that recognition of this via "our intelligence" is nothing other than Her very Being. She is the Intelligence we are using as we make our way along the path of Liberation and Devotion. As the SRV slogan says, and which this retreat unwrapped, "None else than Self; none other than Mother."

Throughout the series of four days, all teachings were sweetened with sacred music offered by Babaji and the Jai Ma Music ensemble, with Anna Fiasca on harp for the closing. The setting of the retreat, in the early Fall along the Washington side of the Columbia Gorge, nestled in a large forest cabin, was imminently conducive to contemplation, deeper inquiry, intensification, and the ongoing and cumulative deepening spiritual awareness of the sangha as a whole.

The Navaratri Retreat. For me a jeweled dance in the jnana. I forget the words of the teachings, but the essence of them remains as I see my life transformed in texture, perception, knowing, understanding. The space of the Sangha is a loving space which, in its vibration, expresses the deepest truths of the spiritual aspirant. The trials and tests of worldly life are illuminated by spiritual wonders. I know Babaji says not to mix the worldly with the spiritual, but this ceases to apply when all is Mother.

Fueled by the treasures shared at the retreat, I am strengthened to continue in the worldly life, unattached, offering the fruits of work to Ramakrishna and Kali. The desire to succeed in the world is funded by courage found in the teachings. To give back to the Guru, the Sanga, is the reason for pursuing material success. The Navaratri Retreat filled me with courage, peace, tenacity, and love. In Gratitude. And our hosts were wonderful.

O human mind, while thinking and perceiving,
invoke instinctively the subtle sound Om Kali.
Why not ground your entire being in her living name
that dissolves all dangers arising
from without and from within?....

O mundane mind, stop thinking in habitual patterns,
move beyond the structure of past, present, future,
leave your obsession with temporality.
Without care or regret sing Ma Tara, Ma Kali.
Sail smoothly across the ocean of relativity.…

(excerpted from a poem by Ramprasad Sen, Mother of the Universe, by Lex Hixon, p.46)

Members of the SRV Hawai’i sangha gathered together with Babaji over the first weekend of 2014 to plunge more deeply into the secrets of mantra. As the name of the retreat implies, mantra given in sacred ceremony to a sincere aspirant becomes a profound austerity when practiced with devotion and knowledge. Holy Mother avers that use of the mantra is efficacious even if repeated habitually, but She is also adamant that a single repetition with full concentration on the meaning of the mantra is worth far more than all the mindless or parrot-like repetitions. Thus, this retreat delved into the meaning of mantra in its parts, methods of repetition, and the results that one should experience if one practices properly.

Why does the mantra penetrate through Maya? Because it is made of maya – Mahamaya. Use the best and highest aspect of Maya to pierce through name, form, time, space, and causation. Get it from a high source, called Guru, and use it to pierce through maya's covering and distorting powers. Take a divine name, meditate on a blessed form – and the end to the regimen of cause and effect is right there and available.  – Babaji

The mantra comes spilling out of the Word.  It makes everything balanced.

All the aspects of the Wisdom Particle are scattered and disjointed when one does not concentrate.  The mantra reveals this predicament to the mind.  When the mind concentrates, it is like throwing a magnet into a pile of iron filings – clap! – they all connect!

Mantra, Yantra, Tantra, Siddhanta!  Via concentration on the mantra given by the Guru in sacred ceremony, one intuits that everything is a symbol for God (Yantra).  This leads to Tantra (the knowledge that saves), and ultimately to the conclusion (Siddhanta) that everything must be God.

The deities are all in you.  Think of them as divine qualities that you can manifest.  One may pray for a vision, but the deity could come in a dream and say, "Just manifest Me!”  Mother Tara is within us.  If we get Her vision, okay, we saw Her.  But what about manifesting Her as compassion in life?

Do not intensify an unclear mind.  Purify first, and when clarity comes one should then intensify with austerities and deeper practices.  Consult the Guru for guidance in this.

When one begins to examine one's consciousness, hidden samskaras come out – tendencies one did not know were there.  Suppose one says to the mind, "I am Brahman," "I am Perfect."  If one is sincere, then the next day one sees all of one's imperfections surface, and then knows what needs to be worked on.  If one is insincere, deluded, then one marches on in false pretense.  Pretense is immature presumption that belongs to the ego.  It must be done away with.

[Babaji taught the Four Stages of the Word: Para, Pashyanti, Madhyama, and Vaikari.  Para is Supreme and represents absolute unity, homogeneity, indivisibility.  Pashyanti is also a state of unity, but is where the stage is set for concepts and meanings to come forth.  Madhyama is where idea, meaning, and sound come together, and Vaikari is where everything solidifies into tangible objects.]
In deep sleep (correlative to Pashyanti in the individual) one's Witness is usually veiled.  But one can take this Witness consciously into meditation and inspect the pashyanti stage – the world of pure ideas.

[Babaji presented a teaching on the Tantric principle of Kamakala, part of the Sristi Rahasya, the Secret of Creation.  Kamakala can be described as the demiurge, the inexplicable urge to create.]
Kamakala is:

Kamakala is a cosmic principle that helps beings fulfill their desires in time. (kama, desire and kala, time).  At a Cosmic level it is Lord Brahma's desire to create.  But why is there this urge to leave the state of blissful absorption in pure Reality?  It is an inexplicable drive to sport; it is the demiurge.  It is you and your projections resulting in dreams.

Keep yourself in a high state of mind and maya will not be able to bother you.  However, if you fail to do this, then maya seeps in without your knowing it in waking, dream, and deep sleep.  You will know this to be true when imbalance attends your mind, and negativities enter your life.

Ishvara is a Mahatattva (Ultra-cosmic Principle) so high that It is both with form and formless.  It becomes Avatar when it takes on Its aspect with form.

If the Mahavakya, "I am Brahman," strikes the mind when it is in a clear state, then great strides can happen.  But if it hits the unclear mind, then there can be trouble, such as presuming too much, too soon.

Namaste! How does one articulate the ineffable profound change that I have experienced from this sweet, yet powerful weekend spiritual wisdom retreat on Mantra presented by beloved Babaji Bob Kindler with such erudite, clear, wise, and concise information transmitted with so much love and precision of thought for digesting within my whole being! I am truly grateful for this past weekend's opportunity to learn so much toward enhancing my daily sadhana, combined with the warm and loving fellowship of holy company and sharing the most blessed prasad to equal the nectar of wisdom I felt joyously stir my heart and soul. So many mahalos/thank-yous. I am truly blessed and blissed! ~ Love, Nivedita