Spiritual life is all about Enlightenment, not entertainment.

Selflessness manifests as a person with no regard for his or her personal comfort.  Divine Mother has gotten into that form for the benefit of all others. 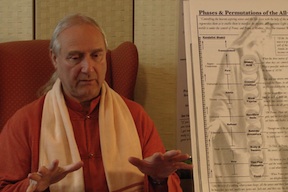 Prana is the most addictive substance.  Whatever you like, or are attracted to, it is the prana that gives it allurement.

People are told to watch their breath.  Why? To calm the mind.  But no one asks where breath comes from.  If one jumps from meditation on gross objects straight to mind (by passing subtle senses and objects, and the fivefold prana), then one will never know prana's role in the process of manifesting objects and thoughts.  This is a problem in the West today.

Most teachings around life force leave vital prana, psychic prana, and Shakti separate, but they are all connected.  Unfortunately, it is the physical prana that gets most of the attention.  Thus, inner life is left unseen and untapped.

One needs to connect the prana to the three matras of Om: inbreath is A, held breath is U, and outbreath is M.  If these three are left unconnected, then life is left confused, and mind remains scattered.

Divine Mother is the subtlest Presence in and behind all things.  Her Presence is there as the prana in food, in thinking-consciousness, and finally She is realized as Consciousness.  This is a very refined understanding of what She is.  Before this, one could not contemplate Her.  One entirely missed Her presence.  As the Svetashvatara Upanisad states:

Te dhyanayoganugata apashyan  Devatmashaktim svagunairnigudham   Yah karanani nikhilani tani   Kalatmayuktanyadhitishtatyekah.
"Practicing the yoga of meditation, the seers beheld the Divine Being, Existing everywhere, and in everything, and which though veiled by its own modes of nature, was nonetheless one and indivisible – and which had been imperceptible earlier due to the limitations of their own intellects.   Om peace, peace, peace."