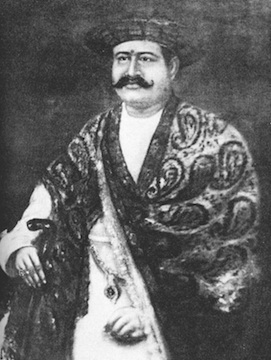 In the life of Sri Ramakrishna we can observe the many notable personalities who had the good fortune to assist the great Master in his mission. Each of these individuals in the Master’s inner circle had a unique role to play as the Divine Lila of the Kali Avatar unfolded. One of the key figures in the life of Sri Ramakrishna, particularly in the early years, was Mathur Nath Biswas, also known as Mathur Babu.

The Dakshineswar temple garden, where Sri Ramakrishna spent most of his life, was dedicated on May 31, 1855. The temple which houses the [image of] Goddess Kali was founded by Rani Rasmani following a dream she had when she was about to start on a pilgrimage to Benaras. The dream moved Rani intensely, and she instructed her trusted people, especially her youngest son-in-law, to look for plots to construct the Kali Temple. The building and administration of the temple eventually fell to the son-in-law named Mathur.

Within a year of the temple dedication, the head priest, who was the brother of Sri Ramakrishna, passed away, and the Master was then appointed to take his place. At that time Sri Ramakrishna commenced a period of intense spiritual transformation. He later said, "In that state of divine exultation I could no longer perform the formal worship. ‘Mother,’ I said, ‘who will look after me? I have no power to take care myself. I want only to talk about thee. I want to feed thy devotees. I want to give a little help to those whom I might chance to meet. How will all that be possible, Mother? Give me a rich man to stand by me.’ That is why Mathur Babu did so much to serve me."

And so it was that Mathur undertook the role of supporting the Master’s worldly concerns, thereby helping Sri Ramakrishna to fulfill his spiritual mission. Mathur felt that the temple was filled with an intense manifestation of divinity due to the presence of the Master. Sri Ramakrishna, due to his divine intoxication, exhibited strange and unconventional behavior and manners of worship that drew complaints from temple officials. Mathur had insight and sensitivity to the spiritual moods of Sri Ramakrishna and realized that his worship was the result of heartfelt and profound love for the Divine Mother.

Sri Ramakrishna's visions became deeper and more intense. He no longer had to meditate to behold the Divine Mother. Even while retaining consciousness of the outer world, he would see Her as tangibly as the temples, the trees, the river, and the people around him.

On one occasion Mathur Babu quietly entered the temple to watch the worship. He was profoundly moved by the young priest's devotion and sincerity. He realized that Sri Ramakrishna‘s devotion had transformed the stone image into the living Goddess.

Sri Ramakrishna one day fed a cat with the food that was to be offered to Kali. This was too much for the manager of the temple garden, who considered himself responsible for the proper conduct of the worship. He reported what he considered to be Sri Ramakrishna's insane behaviour to Mathur Babu.

Although Mathur had great faith in the sincerity of Sri Ramakrishna's spiritual zeal, even he would occasionally doubt his sanity. In one phase of his sadhana Sri Ramakrishna was imitating the mood of Hanuman, the monkey chieftain of the Ramayana, the ideal servant of Rama. When he meditated on Hanuman his movements and his way of life began to resemble those of a monkey. Mathur had noticed him jumping about like a monkey.

One day, when Rani Rasmani was listening to Sri Ramakrishna's singing in the temple, the Master abruptly turned and slapped her. Apparently listening to his song, she had actually been thinking of a lawsuit. She accepted the punishment as though the Divine Mother Herself had imposed it; but Mathur was distressed. He begged Sri Ramakrishna to keep his feelings under control and to heed the conventions of society. God Himself, he argued, follows laws. God never permitted, for instance, flowers of two colours to grow on the same stalk. The following day Sri Ramakrishna found and presented Mathur Babu with two hibiscus flowers growing on the same stalk, one red and one white. Sri Ramakrishna replied, "Yes, He can do everything – even that.”

Mathur and Rani Rasmani began to ascribe the strange behavior of Sri Ramakrishna in part, at least, to his observance of rigid continence. Thinking that a natural life would relax the tension of his nerves, they devised a plan with two courtesans. As soon as the women entered his room, Sri Ramakrishna beheld in them the manifestation of the Divine Mother of the Universe and went into samadhi uttering Her name.

Although Mathur was extremely careful about spending money, his generosity was boundless in regards to Sri Ramakrishna. At the bidding of the Master, he would lavish gifts on visiting monks and during pilgrimages with Sri Ramakrishna, Mathur, at the behest of the Master, would often feed and clothe entire villages.

Sri Ramakrishna conferred upon Mathur many worldly boons and spiritual blessings. Absolutely convinced of the Master’s purity and divine nature, Mathur once declared, "My wife, children, wealth, position, and everything else are unreal. Sri Ramakrishna alone is real." On another occasion he said to the Master, "Father, there is nothing inside you but God."

For 14 years Mathur served and followed the Master with absolute devotion, and this service resulted in a great transformation in Mathur’s nature. Sri Ramakrishna, as he had done with other devotees, raised Mathur’s mind to a higher state.

Mathur’s role in the play of Sri Ramakrishna came to an end in 1871 after a brief illness. At the hour of Mathur’s passing Sri Ramakrishna became deeply absorbed in samadhi for several hours while helping Mathur to reach the goal. When he came out of samadhi, Sri Ramakrishna remarked, "The companions of the Divine Mother took Mathur with love and care into their celestial chariot and his soul has ascended to the sphere of the Mother.”

Sign Up Now
For Email Marketing you can trust.
All content copyright © SRV Associations 2008 - 2021
Designed by diamondheartstudio.com
Go to top