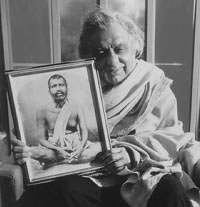 Swami Aseshananda, direct disciple of Sri Sarada Devi, was the head of the Portland Vedanta Society in Oregon from 1955 until his passing at the age of 97 in 1996. A dynamo of spiritual energy who profoundly affected the lives of countless beings through constant worship, personal instruction, public outreach, and untiring attention to other facets of spiritual life, Swami exemplified the best of Sanatana Dharma teachings.

Lecturing several times each week on the Message of Vedanta, his topics were varied yet he never failed to include the crucial teaching regarding the need of a guru. He often emphasized the four qualifications of a true teacher according to Shankaracharya:

It was Sri Ramakrishna and Sri Sarada Devi that he pointed to as the epitome of such a teacher. To him They were the highest ideal; he lived in Them and They lived in him.

Swami Aseshananda was born July 10, 1899, in Faridpur, India. In his adolescence he studied philosophy at St. Paul's Cathedral Mission College in Calcutta. He was blessed with initiation by Holy Mother in 1917 and subsequently joined the Ramakrishna Order in 1921, receiving initiation into Brahmacharya from Swami Brahmananda in 1922 and his final vows of Sannyasa from Swami Saradananda in 1923. Thus, many of the God-realized direct disciples of Sri Ramakrishna were his teachers. He served as private secretary to Swami Saradananda, the General Secretary of the Order, from 1921 to 1927. Later, he worked at the Varanasi Advaita Ashrama and the Madras Students' Home in India.

In 1947, the Swami was sent to the United States to serve as the Assistant Minister to Swami Nikhilananda at the Ramakrishna-Vivekananda Center of New York (1947-49). Serving briefly at the Vedanta Society of Boston, he then was sent to the Vedanta Society of Southern California in Hollywood for the next 5-6 years where he served as Assistant Minister to Swami Prabhavananda, especially at the monastery at Trabuco. He came to Portland on February 5, 1955, as Minister-in-charge and served in that capacity until he passed on. It is significant to note that unlike any other swami sent to the U.S., Swami Aseshananda never once returned to his homeland. He was once heard to say that Holy Mother had sent him to the West, and thus he would stay.

"Western science has split the atom, releasing a great power for potential destruction, but
Sri Ramakrishna, [by the power of his intense sadhana] has split the curtain of Maya,
releasing a great power for realization." "Power and Peace do not go together: If you seek power you get Rolls Royces; if you seek Peace you get God." "Renunciation is not condemnation, but deification."   — Swami Aseshananda

Babaji Bob Kindler, spiritual director of the independent SRV associations, met Swami Aseshananda in Portland when the Swami was in his 80's. Reflecting upon his experiences as his disciple, Babaji wrote the following passages after Swami's passing:

"The expression, 'passed on,' is an inappropriate term in his [Swami's] case, for the Atman, That which the Swami fully identified with, which is the eternal Soul of every living being, has nowhere to go, being all-pervasive and ever-permanent. Therefore, like other devotees of Holy Mother, this great Swami, who gave his entire life in Her service and in the service of Sri Ramakrishna Paramahamsa, is now all about us and within us, permeating us as our very consciousness.

He was fully committed to the Order that bore his master's name, but one always got the feeling that his true allegiance was to the Master and Holy Mother themselves rather than to an organization. He never returned to India after leaving it for service in the West, and this demonstrates the width and breadth of his realization, for time, place, circumstance and personal considerations were all sacrificed or overlooked in lieu of the essentials of spiritual life. To him, the Atman was all, was everywhere, existing both throughout and beyond everything. In all respects, his mind was undivided and he fully epitomized the high ideal of absolute Unity which others only talk about.

Once, I heard that some Catholic nuns had come to him, attracted by the life of Sri Ramakrishna. Though they wanted to embrace that ideal, he sent them back to their church. Later I learned that he had initiated them. This I cannot substantiate, but it would not surprise me in the least. He was so apparently orthodox in certain ways, but absolutely unorthodox in others. For instance, several times a day, month after month, for years and decades, without fail and until he could no longer bend his knees due to old age, he worshipped the Universal Mother in the Vedanta Society shrine room. This formal worship occurred side by side and in perfect harmony along with his adherence to non-dual philosophy. This impressed me the most and taught me that there is no contradiction between external worship and non-dual realization, that, in fact, the two must go hand in hand to complete the picture. He was not a mere jnani or an ordinary bhakta, but was instead a Brahmajnani and a devotee of the Divine Mother who blended life-long service with uncompromising faith in the ideal.

I cherish greatly the many teachings that he transmitted directly into my heart and mind. Meditating with him transformed me, though I suffered on some occasions and enjoyed spiritual bliss at others. He answered my questions as they came into my mind before I could voice them, and many teachings pertinent to my spiritual growth were spontaneously emphasized during his many lectures. Most wonderfully, Holy Mother was there within him. So many of us had the great boon and blessing of having her darshan through his clear and pure presence.

In truth, we have felt his presence strongly over these past years as we attempt to mold the Sarada/Ramakrishna/Vivekananda Association (SRV) into a strong organization for service and Self-realization. I see the Holy Mother's hand in this, for Swami Aseshananda was the first to give his verbal support of this venture when Lex Hixon and I approached him for his perspective in 1985. 'Yes,' he said, 'gather together in a spirit of reverence and offer it all to Holy Mother and Sri Ramakrishna.' After a meaningful pause he added, 'Have everyone read from It (the Gospel of Sri Ramakrishna) every day too.'

About most other teachers I have met, I can say little. About Swami Aseshananda, I can say that I met and took refuge with a Jivanmukta, a fully liberated being. Portland, due to his presence, has become a place of pilgrimage — one of the very few existing in the United States.

Salutations to my guru, forever!"