Holy Mother Sri Sarada Devi has stated that with the advent of Sri Ramakrishna, a new golden age has commenced. In this incarnation He came accompanied by extraordinary souls. This inner circle is commonly known as the sixteen direct disciples. Among these sixteen, Sri Ramakrishna declared that six of his disciples were ishvarakotis – souls that are eternally free and who allow themselves to incarnate for the benefit of humanity. Among these six ishvarakotis was Swami Yogananda, who the Master declared to have been Arjuna in his previous life.

One of the lesser-known and more enigmatic of the Master’s direct disciples, Swami Yogananda was a spiritual giant who was one of the pillars of the newly established order of monks that organized around Swami Vivekananda after the Mahasamadhi of Sri Ramakrishna. He was Holy Mother's first initiated disciple, as well as her devoted attendant, and the first vice president of the Ramakrishna Mission. 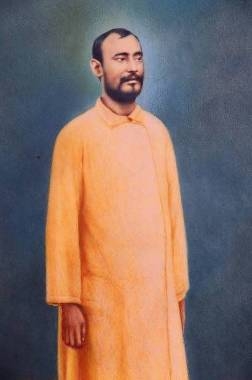 Known as Jogin in the Gospel of Sri Ramakrishna, Jogindra Nath Roy Chaudhury was born into a religious, aristocratic Brahmin family. From early childhood he often became overwhelmed with spiritual feelings. He would ask himself, "Where am I? Certainly, I don't belong here. These are not my playmates." He thought that his real home was somewhere far off among the stars. The world to him felt like a dream.

Jogin lived close to Dakshineswar and was fortunate to meet Sri Ramakrishna when he was only a young boy. The Master recognized him as one of His disciples and encouraged him to keep returning.

Jogin began to turn inward, meditating, worshiping, and reading scripture. During his final year of school, his visits to Sri Ramakrishna increased until he began visiting on a daily basis. His innate spiritual longings began to take direction under the tutelage of the Master, and the attainment of God occupied his entire being.

The long hours he spent in spiritual sadhana began to make him indifferent to his school studies. His family was alarmed that Jogin was losing interest in the world, and so made arrangements for him to be married. At first he rebelled, but his mother’s tearful appeals softened his resolve and the marriage went through. He refused to share a bed with his wife and spent his wedding night in prayer. Jogin later told his brother disciples, "As soon as I married, I thought that any hope for God realization was now a mockery. Why should I go to the Master anymore? His first teaching was to renounce lust and gold. I thought I'd ruined my life. This decision could not be reversed. The sooner I died the better. I used to visit the Master daily, but after the wedding I stopped going to him altogether and spent my days in utter despair and repentance. But the Master didn't forsake me. He repeatedly sent messengers and called for me." Sri Ramakrishna approached Jogin and said, “What if you are married? What is there to be afraid of? If you have the grace of this place (meaning himself) even one hundred thousand marriages are powerless to affect you. If you want to have family life and realize God at the same time, bring your wife here at once. I'll make both of you fit for that. And if you want to renounce worldly life and attain God, I'll make that possible for you as well." These words of the Master penetrated Jogin’s heart and his despair dissipated. He bowed down to the Master in gratitude.

Even marriage could not change Jogin’s innate spirituality and natural renunciation. He continued to visit and serve Sri Ramakrishna and his devotion increased. To his shock, his parents then said to him, “If you didn't want to live as a householder why did you marry?" Jogin thought to himself, “O Lord, I was ready to forsake You to please my mother, and now she talks like this? Forget it! The Master is the only person I've ever met in this world whose word and thought are in perfect accord." From this point on his mind turned increasingly toward spiritual matters.

Although Jogin’s dispassion towards worldly affairs pleased Sri Ramakrishna, the Master still insisted that he be able to function in the world with strength and common sense. On one occasion Jogin went to a shop to buy an iron pan. He talked briefly with the shopkeeper about holy matters and assumed that the shopkeeper would therefore be honest with him. When he returned home, Jogin discovered that the pan had a crack. Sri Ramakrishna heard about this and scolded Jogin: “Because you are a devotee of God, does that mean that you should be a fool? Do you think any shopkeeper opens up a shop to practice religion, why did you not examine the pan before you purchased it? Never act so foolishly again."

When Sri Ramakrishna became ill and was moved to the Cossipore Garden House, Jogin became one of the main attendants of the Master, serving him devotedly night and day. Around a week before his final passing, Sri Ramakrishna asked Jogin to read from an almanac and describe the position of the stars. When Jogin finished reading about the date August 16, 1886, the Master told him to stop and close the book. Sri Ramakrishna eventually left his body on that very day.

The Mahasamadhi of Sri Ramakrishna was a deep shock to all of those in his inner circle. Jogin was asked by Holy Mother to accompany her to Vrindavan, along with several other disciples. He fully devoted himself to the service of Holy Mother. He saw the very essence of the Master in Her being, and to serve Her became his sadhana.

One evening, the Master appeared before Holy Mother and said, “Give this mantra to Jogin.” Holy Mother thought she had imagined this until she had a second vision in which the Master told her the mantra to impart. She approached Jogin and asked if he had his initiation. He said, “No, Mother, the Master did not give me any particular mantra of any special deity. I repeat one according to my own choice." He had also had a vision that he was to be initiated by Holy Mother, but was too modest to make such a request on his own. On the auspicious day, the mantra was imparted and Jogin became Holy Mother’s first initiated disciple.

Jogin eventually returned to Calcutta and joined the other disciples at the Baranagore Monastery. He took formal monastic vows and became Swami Yogananda.

Yogananda preferred to be in solitude, practicing japa and meditation for hours. He would also fast and practice fierce austerities. His health began to break down as a result of these austerities, but his countenance continued to be amiable and the quiet spiritual power which emanated from him inspired many on the path of renunciation and God realization.

Despite his natural propensity towards solitude, Yogananda had a great organizing ability. He organized large celebrations for the birth anniversary of Sri Ramakrishna. He also organized the grand reception given to Swami Vivekananda upon his return from America. Swamiji appointed him the first vice-president of the Ramakrishna Mission Society.

Yogananda had some reservations about Swamiji’s methods. He told Swamiji, “I see clearly that the Master is working through you. Still, I confess, doubts do sometimes arise in my mind, for, as we saw it, his method of doing things was so different. I am led to ask myself whether we are not straying from Sri Ramakrishna's teachings." Swamiji replied, “The thing is this: Sri Ramakrishna is far greater than his disciples understand him to be. He is the embodiment of infinite spiritual ideas capable of development in infinite ways. Even if one could find a limit to the knowledge of Brahman, one cannot measure the unfathomable depths of our Masters mind! One gracious glance of His eyes can create one hundred thousand Vivekananda’s at this instant! But if this time he chooses, instead, to work through me, making me his instrument, I can only bow to his will." Yogananda was deeply moved, and recognizing Swamiji’s greatness, became firmly determined to follow this vision of serving God in man that Swami Vivekananda inspired.

For all of his noble qualities, Swami Yogananda commanded great respect amongst his brother monks. He was uniquely blessed to render devoted service to Sri Sarada Devi, The Holy Mother. Because of his innate purity, the Master allowed him to do errands for Holy Mother, and these duties increased as the years went by.

Yogananda was one of the rare few to have free access to Sri Sarada Devi. He was so respectful towards her that he would not bow down to touch Her feet. Instead, when Holy Mother would leave the place, he would touch that spot with his head. When asked why, he replied, "I don't have the audacity to keep the Mother standing and waiting for me so that I can bow down to her." Holy Mother herself once said, "None loved me as did Jogin. If anybody would give him any money, he would save it, saying, Mother will use it for her pilgrimage."

A lifetime of severe austerity and sacrifice took its toll on Swami Yogananda’s body. He became increasingly frail and ill. Towards his final days, as his body became weak and emaciated, he spoke about the Master. "There have always been various religious paths, countless scriptures, and holy places in every country. In spite of that, why is there a decline in religion? Because in the course of time all ideals became lost. Therefore, God incarnates himself to explain the hidden history of religion and to show the ideal. By the grace of the Master I have attained so much knowledge and devotion that I am unable to express it all."

Swami Vivekananda approached him and said, "Jogin, you get well, let me die instead." He was visited by Swami Niranjananada, who said "Jogin, you are our crest jewel."

During his last hours Yogananda said to Holy Mother, "Mother: Brahma, Vishnu, Shiva, and Sri Ramakrishna have come to take me."