Spring Retreat in Seattle, Washington
Reflections and Notes
All of our SRV retreats are unique and profound, and each “retreat sangha” has its special character.  The Yoga Vasishtha retreat with Babaji, held in Seattle last May, was one of our smaller such retreat sanghas and especially conducive to more subtle communion in the teachings throughout all activities of the weekend – classes, satsangs, meal times, and walks.
Reflection #1
Among the teachings given that particularly inspired me were those concerning prana and its workings from the most basic movements in the physical body, to its varied and increasingly subtle expressions in the finer and finer dimensions of the mind (individual, collective, cosmic) until it merges into Mother, Herself, pure dynamic Intelligence/Consciousness.  The implication, properly understood, is that we are to learn to recognize Her manifesting grossly as prana, then more and more subtly in all manifestations of force or energy, including the movements of thought, their origins as meaning and idea, and so forth.  One of Lord Vasishtha’s signature teachings concerns the tracing of origins, until, as Babaji pointed out, one discovers that the origin of everything is actually originless.  We can see the tracing of origins in this teaching of prana and its final source/origin in Mother’s dynamic Intelligence-force, which is unoriginated.  The integration and wholeness this imparts to the entire psycho-physical being and identity in ultimate Reality has become a focus of contemplation. — Annapurna
A few Notes 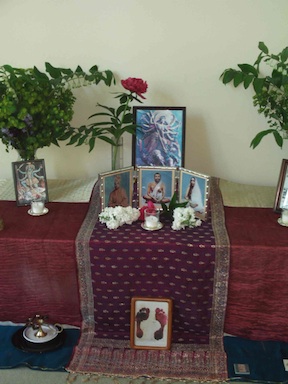 We meet today to create a bubble within a bubble.  The bubble outside may be maya, but this inner bubble is Mahamaya.  The words of the guru are Mahamaya according to Sri Ramakrishna.  And the protection is in our meditation, taking the teachings, performing sadhana, etc.

Jnana Yoga's unique way of watching the breath, of doing pranayama, is to seek for its origins.  Just to observe is not enough.  One has to recognize the prana and trace its path back to the Source.

One gets shaktipat through the teachings.  Nowadays, people are waiting for someone to tap them on the head with a feather, shine a crystal upon them, or read a deck of cards.  Did Christ, Buddha, or Sri Ramakrishna seek or do these things??  Real shaktipat comes through hearing and studying the wisdom teachings in an open and receptive mode and mood.

Swami Vivekananda's koan: God is not in the world; the world is in God.  This pithy phrase encapsulates thousands of years of Wisdom.  Meditate on it and it will implode within you.

[Teaching from the chart, "The Origin and Perpetuation of Disease," Babaji noted the following]:
The absence of viveka, discrimination, breaks down the spiritual immune system and leads to rebirth, the first disease.  Viveka is cultivated and maintained via daily spiritual practice and contemplating great sayings like "I and my Father are one," and "That thou art."  Other essential causes of disease include the lack of mastery over the sense objects, and the inability to stem desires and egoism in the mind.  All other causes of disease are secondary, at best.

How does Lord Vasishtha remove the tendrils of maya from the young Sri Ram's mind?  By taking his focus off the unreal maya (suffering and compassion) and placing it on Brahman.

Food – Since everything is in the mind, the mind itself is the purificatory mechanism.  Use the mind to put pure energy rather than poison into one's food.

Raga – the power of attraction.  Now we know what holds everything together.  It is not love.  Love tends to pull things apart and free them.  Love of the mother for the child, etc, is love of prana, dependence on food and bodies, etc.  But Love of God tends to disperse and free everything.

One's psycho-physical being has to learn how to digest particles of more and finer subtlety.  From Atomic particles to Atmic particles – this is the path of the luminary seeking Absolute Freedom.

Sometimes you feel like a nut, sometimes you don't.  Prakriti has nuts; Brahman don’t.
[Babaji humorously referring to the swing of the devotees between love of God with form and attraction to formless Reality.]

Reflection #2
For the last few years, I have been blessed with opportunities to attend many of SRV's spiritual retreats. Held in different locations throughout the year, each one offers profound teachings, indispensable fellowship with sangha, and true respite from worldly concerns and actions. It's like receiving a massive dose of Vitamin D-harma.

This year's Spring Retreat in Seattle was particularly noteworthy for me. I'm not sure if I can put my finger on the reasons for this, but here are some thoughts that have come to mind regarding this excellent retreat. First, I believe the location is a blessed one, and year round, not just for that weekend. Sandra's Victorian home is imbued with dharma and devotion. I feel that as soon as I walk through the front door, I am immediately in a more spiritual place, both outwardly and inwardly. Perhaps because I was familiar, and thus more comfortable, with the surroundings — having attended other retreats there before — made for an unprecedented retreat for me. Maybe also because it's a real home and not a public retreat center that I felt fully welcome and at ease.

I can't help but think that part of the success of this retreat is Sandra's stewardship overall, but particularly in the kitchen with food preparation; obviously delicious but also efficient and quietly prepared in the background of the daily activities. Meals seemed to appear by magic. It's her uniquely humble style of running a tight ship that makes all the difference; I mean this as a compliment of the highest order.

We were not a large group on this occasion, so there was a convivial intimacy I haven't felt as much previously. The group meditations were especially potent for me. I can't help but feel that the presence and participation of Babaji's brother, Steve, brought something special to our interactions. I won't presume to analyze why, but I know there were joyful undercurrents that reinforced my overall enjoyment in subtle ways.

I wonder, too, if maybe I might have reached some "critical mass" in retreat attendance. Having participated more consistently these last few years, could I now be reaping new and deeper benefits? This reminds me of a Woody Allen quote: "Ninety-percent of success is just showing up." Well, I've been showing up. I invite more of my sangha brothers and sisters to do the same. Not only because you'll grow in leaps and bounds, but, selfishly speaking, I'd really enjoy seeing “yous guys.” It's the truth! — Manjushri
All content copyright © SRV Associations 2008 - 2020
Designed by diamondheartstudio.com
Go to top