Reflections on the Kundalini Retreat 2010
by Akshaya-bhakti

First, I must acknowledge the sweet, devotional aura which pervaded the retreat.  I realize through the teachings that even positive feelings are transitory, are part of the dualities of life; however, being with guru and sangha at the idyllic Buckhorn Springs Retreat Center brought a  rare joy that I can instantly recall in its full intensity.   Even when I watch the luminous faces in my slide show of Medha's photos, I am overcome by a deep sense of love that goes beyond mere convention. 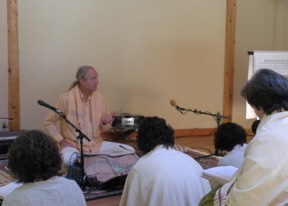 The scheduled times for meditation and personal reading / reflection each day of the retreat were greatly appreciated, but the classes themselves with the enhancement of Jai Ma Music offerings were especially fulfilling.  Some of my favorite teachings over the course of the retreat included:

How the chakras are connected to the Mahashakti Herself and then practicing this communion with Her in the detailed guided meditation that was bestowed on us.

The beautiful readings from the Srimad Devi Bhagavatam and the awesome teaching that these chakras (also called “lotuses”) are composed of 350,00 nerve channels that possess a host of forces that each work on a specific plane of consciousness.  Further, the “petals” of the lotuses hold the letters with their innate powers.

The readings from the Kundalini Upanshad were also welcome.  Then there were the powerful charts such as the “5 Akashas” and “The 7 Causes and Ten Impediments in Kundalini Yoga,” which included not only the poisons/negativities associated with each chakra, but the nectars as well.

In addition to the abundant sparks of wisdom, the classes were also filled with practical advice and encouragement.  One of my favorite analogies was the story of the mother hen who listens for the intensity of the chick’s struggle, teaching us that we must “peck” at our “egg” in which we have bound ourselves until Mother hears us and knows we sincerely want to be free.  Since I have been trying to strengthen my resolve lately,  I also liked the advice to “Be a muscle head.  If you feel resistance, resist it!”

In her request for our input on the retreat, Loke wrote, "May this find you looking forward to the New Year enthused for Spiritual Sadhana by the Truth we have gleaned this year."   That summarizes perfectly what the retreat brought to me...  Jai Ma! 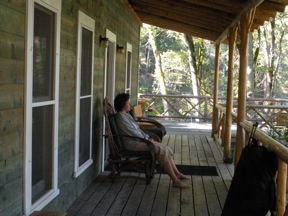 [The Kundalini Yoga Retreat, held at Buckhorn Springs last Fall (2010) will no doubt be considered over time as a pivotal event, not only personally for those of us who attended, but also for being the inspiration for Babaji's new book Reclaiming Kundalini Yoga, due out in 2011.  The specialized teachings of this retreat also seeped into Babaji's classes in Oregon and the prisons for the duration of his Autumn 2010 teaching visit, and resulted in five special classes in Hawaii.  The teachings of Kundalini Yoga are subtle and esoteric.  A stream of transmission continued at Buckhorn for four days on topics that caused this student to just sit and drink them in, hearing many of them for the first time, and trusting that their essence will link up with other knowledge and that assimilation will occur over time with practice.  I am one of the fortunate ones to get both the retreat and the Hawaii classes.  The following notes from Babaji’s teachings are rather sparse, but contain useful details and "pithy points."  For more details on Babaji's Kundalini Yoga classes, go to "Student's Notebook" on the SRV website and also read the class notes in this issue of Mundamala. You can also pre-order the book!]

"Have you straightened your coil?"  This is how those in the know about Kundalini will ask you if all your chakras have opened to the flow of Mother's dynamic Intelligence-energy; for Mother Kundalini’s force is described by the yogis as a coiled snake waiting to meet Paramasiva at the crown chakra, the sahasrara.

The illumined beings, born with no karma, are about their "Father's business."  They know that they are not here for pleasure or for power.

When you know your formless Essence, this world is bliss.  When you do not, this very same world is happiness and sorrow in endless cycles.

Ishvara, the Savior, points to the Formless.  Look in the direction that He is pointing, not at His finger.

Chitta is the result of vashana [desire] and prana.  Whoever controls one controls both.  Best to control prana.  Controlling desire can be difficult, even dangerous.  Control prana with sanctified food taken in full awarenessd and informed breathing exercises, and also with your own self-generated will power.  In the case of desires, try first to sublimate them.  Offer them to God.

[Some notes from Babaji's chart, "The Role of Food and Prana in Self-Realization."]

"Anne hidam sarvam prathistham" - all here is supported by food.  This ancient mantra reveals that the Rishis of India knew about the intrinsic connection between food, its energy, sublimated subtle energy through sadhana, wisdom, and the Self.

Food should be purified and offered with mantra:  Mantra should be uttered in deep concentration over food before it is eaten.  Blessed by such sacred words, pure food is rendered into Prasadam.

Mukhyaprana: this is the energy from food that supports the organs, sharpens the senses, and maintains life in the body.  But when used for these ends only, it never realizes its full potential.  Seize it and subject it to sadhana, spiritual disciplines.  Then watch and feel it rise "up the spine."

Ojas: This is the stored up power resulting from purified food and sadhana combined.  It aids in the release and rise of Kundalini Shakti.

If you can get a hold of the upward rising prana (udana) you will help Kundalini Shakti to rise.  If you cognize the all-pervasive prana (vyana), you can remain still and watch Her sport in the marvelous human form.

People who are awakened have a fairly pure mind.  Their karma comes back at them right away.  But for others, their karma takes a long time to fructify, and this can be very confusing.  It is here that one hears that all to repetitive mantra, "why me?"

Since nature is insentient, you do not want to be one with Nature; rather, you want to know that Nature has come out of you.  But you also want to “avoid voidism."  The psychologist will sometimes say, "It is all in your mind."  The Vedantist replies, "Yes, that is true — literally."

Seers live on Consciousness alone.  They have no fear because they have no want.

Regarding the opening of the Third Eye chakra: if one is in a sattvic (balanced) state of mind, then there will be no fear of death at that time.  However, if this opening arises prematurely in a rajasic/tamasic state of mind, that fear will come.

[Babaji presented teachings on pranayam from the Kundalini Yoga perspective using his chart, "Asana and Pranayam in Tantric Yoga." Since the actual form of the pranayama practice should be received personally from the teacher, this is not included in these notes. However, we also learned that there are three stages of pranayam.  The lowest produces perspiration and is the grossest form. The next stage is that of trembling, and the highest stage is of mental aspiration.  This is when the practitioner is finally getting a hold of this prana (udana) that causes thoughts to rise in subtlety.  Now, this is not a matter of merely breathing.  Babaji emphasized again and again that during the Tantric practice of pranayam, we are to unite this practice with concentration of the mind on the mantra.]

Pranayam should be practiced daily with the mind fixed on Truth. Kundalini Shakti culminates in the wisdom centers of the vishuddha (throat) and ajna (third eye) chakras.  Here, we recognize Her as the Goddess of the Word/Om, as dynamic Intelligence.

[On our second day of the Kundalini Retreat, Babaji presented the chart "The Seven Causes & Ten Impediments in Kundalini Yoga." Besides presenting the impediments and their causes, this chart delineates in detail the poisons and nectars in each chakra.  One would think that the chakras, as Kundalini apparently rises to each one, would exude Nectar alone.  However, improper practice of pranayam and other disciplines, combined with subtle or not so subtle motivations for power and pleasure, can cause premature awakenings that are subject to the poisons.  Consciousness then may fall down to the practitioner's ordinary level of awareness in a state of confusion, and possibly delusion.]

Muladhara (base of the spine)

Svadhisthana (associated at the sexual center)

Manipura (associated at the navel)

Between the Manipura and the heart center lies the Vishnugranthi.  This is a kind of subtle membrane that is difficult to penetrate, but when it is, it signals the movement from worldly life to a true beginning along the path of spirituality.  The consciousness of intelligent people is already located at the manipura level.  Kundalini is already awake here.  But it should be taken to the upper chakras because that is where true Knowledge abides.  People who live at the manipura level only tend to use (veiled) Kundalini power for making a living.

From the Advaitic perspective there is no uncoiling of Kundalini.  She is already present at all the chakras; the sadhaka must realize this, and it is then that he feels She is rising in his centers.

Anahata (associated with the heart center)

When you arrive at this center of devotion, it often acts as a light to reveal that you have issues in the Muladhara and the other lower centers.  But now you have the devotion to neutralize them, whereas before you merely suffered from them.

Vishuddha (associated at the base of the throat)

Negative: falsehood, projection, deceit, domination (these are associated with the 8 occult powers)

When established at this center, one gains freedom from attachment to form.  The world of name and form starts to disappear here, says Sri Ramakrishna.  Mentation, here, means that mind and its thoughts are purified and illumined; they are not ego-driven. Balance means that jnana has married bhakti (knowledge and devotion have united).  This is an ideal marriage with no divorce possible.

Ajna (associated with the point between the eyebrows)

Becoming established in this center of consciousness, ignorance has died and even karma is rooted out.  The poisons here operate as a result of a premature or partial opening to this chakra, also called the third eye.  Attachment to bliss is a factor as well.  The light here can confuse those who are not yet ready for abidance there.

[With regards to the causes and impediments to Yoga in the Kundalini Yoga system, Babaji spent some time cautioning us about a corollary to these and spiritual practice.  He stated, "The first obstacle is thinking that spiritual practice causes your illnesses."  Many seekers and practitioners begin a spiritual practice, and the purifying activity from this prompts the poisons to rise to the surface, sometimes in the body, sometimes in the mind, or both.  This process is directly connected to one's karma and samskaras (inherent tendencies).  When this occurs, naïve practitioners believe their troubles are caused by the practice and thus give it up prematurely, thus short circuiting a necessary detoxification process, so to speak.  These poisons will arise eventually, and are lurking there all the time anyway, unbeknownst to the practitioner and contributing to the veil of ignorance hiding our true nature as birthless, deathless Spirit/Atman.  It is a blessing when these arise in the company of Guru, dharma, and sangha so that they can be effectively neutralized in a supportive atmosphere.  But if the practitioner gets scared, impatient, or prideful, and gives up the practice, teacher, and dharma, these poisons will just perpetuate themselves.]

"You should not enter any challenge, enjoyment, or activity without remembering My bijam," says the Divine Mother.  "Nothing is unattainable to the one who worships Me."