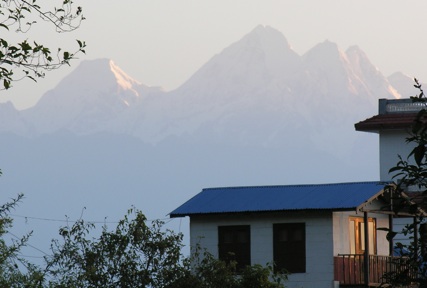 This class followed the Wood Valley Raja Yoga Retreat and ended the early summer series of classes in Hawaii.  Babaji used it as an opportunity to continue with the teachings on Raja Yoga, specifically, the teachings on Samadhi.

In the Vivekachudamani, Shankara states, “Only by that meditation that is free of all doubts does one realize the Self in Nirvikalpa, otherwise, other thoughts will enter into the unstable mind which will then get mixed up with them.”

Control of speech: Be quiet and destroy darkness by seeing oneness everywhere.

Control of senses and mind: Join the word with the mind (meditate on the inner word, unwrap it and let it implode: insight happens).

Attainment of Peace: Join the ego with the witness (after the mind is pure).

Vanishing of the ego: Join the witness with Brahman.

Enjoyment of the Bliss of Brahman: At this point, one attains attachment to and detachment from objects at will.

“The yogi, when he joins with the body, prana, senses, mind, intellect, and all other upadhis, becomes one with them by way of knowledge and mastery; then by easily removing contact with them, he enjoys the Blissfulness which comes from giving up things.” -- Shankaracharya

Chart: The Seven Steps to Attainment of Kaivalya

“Through union of the two principles of nature and soul comes the observation of their difference resulting in realization of one’s true essence.  This process takes place when the Purusha abandons its relationship with matter and mixes itself no more with nature.  This is called Kaivalya, final isolation from the endless stream of phenomena caused by mind, manas, and intellect, buddhi.” – Lord Kapila

[The Seven Steps]
1. Wisdom Transmission: An intellect filled with discrimination comes from constantly trying to perceive the highest Self.

2. Discernment and Clarity: The highest type of dispassion is clarity of knowledge (prasada) – the yogi eliminates suffering, attains all, and snaps the chain of rebirth.

3. Raincloud of Virtues (Dharma-megha): The mind gets established in its own nature and this allows realization of the nature of all things.  Realize the difference between Purusha and Prakriti (the “Changing Brahman”).  This is called sattva-purusha-nytakhyati.  Sattva leads to divine restlessness (which is different from rajas, restlessness due to desire or aversion for objects).

4. Destruction of Blemishes: When the intellect is refined one sees the Light of Brahman.  Luminosity is the self-nature of the intellect; with this realization impurity gets removed, and flow of thought is pure, unsubjugated by rajas and tamas (blemishes that are seen to be unreal).

5. Dispassion towards the Gunas: Freedom dawns when all craving for the gunas ends based on realization of Purusha.  Knowledge expands, ignorance dissipates, and one enjoys Wisdom Samadhi.

6. Destruction of Karmas and Obstacles: Knowledge is at its purest.  Subtle impediments, like karmas of previous births, get obliterated.  One approaches the culmination of perfection, and ushers in an end to even the thought of form.

7. Attainment of Non-dual Samadhi (Nirodha): All the vrittis are brought under control, then the Wisdom Samadhis ensue, followed by Kaivalya and Asamprajnata.

Chart: The Fourteen Stages of Upper and Lower Knowledge (Jnana-bhumikas and Ajnana-bhumikas)
(see also in this issue of Mundamala Notes from the American River Retreat for a summary of all 14 stages)

How does a human soul evolve?  It does not.  All change is apparent transformation only.

Lower Knowledge – From lowest to highest
1. At the lowest state of knowledge: one’s eye is only on the external world, engrossed in the waking state - i.e. people’s ordinary lives.  This state equates to root ignorance and the cloud of unknowing.
2. Awareness of individuation: the ego thinks it is an individual
3. Repeated rebirths: believes that man & the universe are dissimilar
4. Gains sovereignty over nature: gets attached to it, dominates over others, and is full of delusion
5. Gains objectivity: examines life as in a dream
6. Recalls events long past, previous lives, and renders the waking state lucid
7. Realizes all states are beset with pain, and perceives all worlds in maya

Higher Knowledge
8. Attraction for the path of indifference: the soul realizes that all knowledge is within, seeks guidance of an illumined soul, and studies the revealed wisdom scriptures
9. Enquires into the nature of reality: contemplates the Atman, attains virtues, increases spiritual aspirations
10. Gains Freedom from desires, mastery of concentration, and transcends mind
11. Mind adheres to Truth, intelligence gets illumined, and detachment matures
12. Merges in Atman, attains certainty of non-duality, transcends the gunas, and realizes the jivanmukti state
13. Identifies with Consciousness alone, sees Brahman in all, goes beyond attainment
14. Abides in the Self, enters immersion, and rests in disembodied liberation (Turyatita: Full Absorption)

Chart: Samprajnata to Asamprajnata
* Nature starts out unmanifested, therefore, every manifested object has its correlative word, meaning, and vibration (Meditate on these).

* Out of inner Wisdom comes the outer world

[With regard to early yogic meditations on the five elements, ten senses, and manas:] Meditate on the Alambanas (24 cosmic principles) until one attains Wisdom Samadhi, wherein one discovers that all these principles lie back in the mind, which is the origin of nature and all phenomena.  In these Wisdom (cognitive) samadhis, one experiences that the knowledge of everything is within.  In the beginning, this knowledge is overwhelming, but soon, and with practice, one learns to focus in on any given part at will and realize its essence.

Contemplate all objects, the entire world, because eventually one is going to tuck it back into oneself (involution) – and that is where one separates from nature.

Then, meditate on the intermediate links between objects and the intellect (called tanmatras: audibility, flavor, feel, etc.)

Meditate on the ego.  Concentrate on concentration itself, on the act ofconcentrating.  This requires an act of will (or else one’s mind wanders).

Expand the chitta and wisdom will dawn.  The ego is thereby brought under control and is seen to be the cause of primal matter.

In the Mahat is still the presence of Unmanifested Prakriti, with the gunas in equilibrium.  Therefore, one must fully dissolve the Mahat into the unmanifested Prakriti. The soul, recognizing formlessness, where everything, all phenomena, is held in abeyance, will feel the urge to detach from it and thus never return to birth and death in ignorance again.  This is the final break between Spirit and matter, called kaivalya.

Asamprajnata Samadhi (unseeded, no going back to embodiment)

Is free of all evolutes, processes, etc.

The Self dwells in the Self…….