Shining like burnished gold in the luminous sheath of intelligence,

the deepest core of the human being,

That is the Light of all that shines.

That is what the knowers of the Self realize. 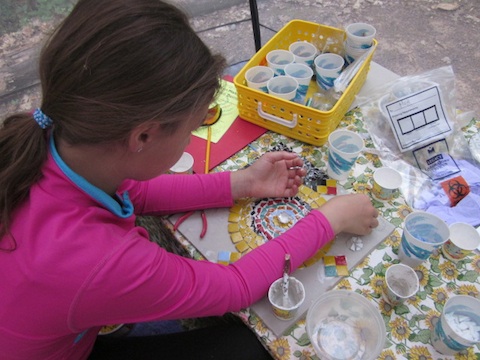 Following in the pattern of the prior two years, SRV’s lesson for children at the summer retreat unwrapped one of the SRV chants selected by Babaji from the Upanisads for the sangha to study and memorize.  Once again, our lone youngster in this age group rose to the occasion for this year’s lesson, and studied the very teachings that will equip her to soon attend the SRV Chela Dharma classes, and Babaji’s classes – maybe in 2014.  As the children’s acharya, I want to acknowledge that it is not an easy matter to take these classes without any peers to mutually inspire, support, and share the demands of the teacher and teachings.  Zuzu, our lone chela at this retreat, is to be commended!

This year’s art project was a tile mosaic depicting Vedantic principles from the lessons. After much discussion, Zuzu decided to make a mandala that symbolizes the Atman, the Five Koshas, and the Five Akashas. Needless to say, this was a philosophically adventurous project, and very absorbing!  The mandala, which has been placed by the classroom shrine in Portland, Oregon, is even now being used by the adult sangha as a teaching tool.

The following explains how the mandala is to be interpreted, and how these teachings correlate: 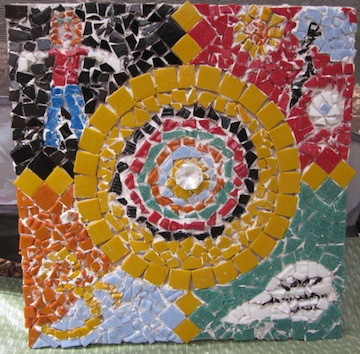 The central crystal and the yellow tiles represent the Atman.  Notice that after the five rings of different colors, the gold tile reappears.  We are to think of this gold of the Atman pervading all the sheaths, and infinitely beyond them.

Koshas are the various psycho-physical sheaths for Consciousness to sport in. These are represented by the five rings that are superimposed over the Atman, from subtle to gross:

Akashas, also called dimensions, space, or realms, are the gross, subtle, and causal worlds inhabited by earthly beings, celestials, saints, sages, on up to the Trinity.  The most subtle Akasha is Chidakasha, the space of Pure Consciousness, which correlates with Atman-Brahman.  For this reason, there are only four Akashas depicted in the corners of the mandala, and the fifth, Chidakasha, is represented by the crystal and yellow tiles of all-pervasive Consciousness (Atman).  All the other akashas in the mandala are colored according to the sheath or sheaths they most correspond with.

Bhutakasha, the space and realm of physical objects: black tiles with a person depicted.

Pranakasha, space of life-force, and realm of the ancestors and celestials: red tiles with thunderbolt and celestial orbs.

Chittakasha, space of thought, and realm of the sages: green tiles with a “thought bubble.”

Jnanakasha, space of Intelligence, and realm of the Trinity: orange and blue tiles, since it corresponds with both the vijnanamaya and anandamaya koshas.

A Story and Lesson

For the prior two summer retreats, we have studied the Gunas, but primarily in terms of how they affect our mental states.  This year, we introduced to Zuzu the idea of vivarta, false superimposition, in a simple way, using the traditional analogy of the snake and the rope, and applied the teachings of the Gunas:

At the end of a sunny, warm summer’s day at dusk, along a country road, a man was taking an evening stroll.  The land of this region was dry, but a cool breeze began to gently blow.  Golden grasses rustled between the lichen-covered rocks that provided tiny bits of shade for lizards, insects, and snakes at the hottest times of the day.

Suddenly, the man saw a large snake warming itself on the road right in front of him. His heart beat fast and he jumped backwards.  Controlling his panic, he looked carefully at the snake.  He saw that the head was the same size as the body.  He thought, “Poisonous snakes here have triangle-shaped heads.”  He could stop being so fearful.  Then he noticed that the tail did not taper.  “Something is wrong here,” he muttered to himself.  He found a stick and stepped closer to the snake and tapped the ground near it.  Nothing happened.  “I wonder if it is dead?”  Losing all fear, he stepped even closer and went to move the snake with the stick and started laughing out loud.  “Oh, some snake you are!  You are really a rope.  How silly I was to get scared like that.  I won’t be fooled next time!”

More about Sattva, Rajas, and Tamas: 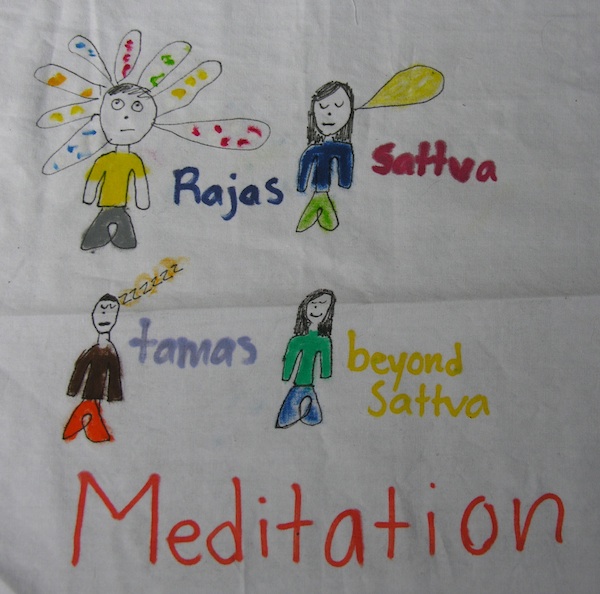 lying on the road.

makes the mind restless, full of desires, and selfish.

It is also the power that makes Brahman, which is Infinite and undivided, look like objects,
bodies, actions, feelings, and ideas – just like when the man saw a snake

instead of a rope.

It is also the power that helps us see Brahman through those objects, bodies, actions, feelings,
and ideas – just like when the man controlled his fear and began to use his powers of reasoning
to get at the truth of what his eyes

and mind were seeing.